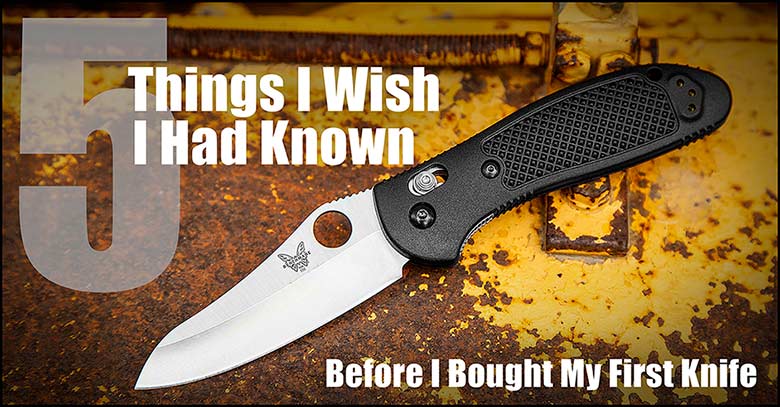 We’ve all dived head-first into a new hobby without giving much thought to everything it will entail. While I view pursuing new hobbies as a positive thing, there is something to be said for having at least an idea of what a new hobby will require from you beforehand.
All of you that are reading this post have at least one thing in common: knife enthusing (if that wasn’t a thing, it is now!). You’ve undoubtedly gained vast knife knowledge since you embarked down the road to knife enthusiasm. There are still people out there who are just beginning to get into knives, and they could benefit a lot from the things you’ve learned. So, my question for you is this: what things do you wish you had known before you purchased your first knife?
Here are a few of the knife tips some Blade HQ employees had to give, but let us know what you think, too.

Knife Tips: I wish I had known…

…some blades are easier to sharpen than others.
A friend of mine was super excited to buy his first knife, and he ended up choosing a knife with a tanto blade. His prime reason for choosing the knife was that it looked cool, and he’s totally right. Tantos are possibly my favorite blade shape because they have sharp, contrasting lines that give them a distinctive look. My friend wasn’t wrong for choosing this blade at all, but one thing he said to me was, “I wish I had known that tanto blades are hard to sharpen.”
Because tantos have two edges, they are twice the work to maintain since there are two edges that need to be sharpened instead of just one. Tantos have strong tips that are great for piercing, but they do require a bit of effort on the user’s part to upkeep. If my friend had known this ahead of time he may have bought his tanto knife anyway, but it’s always good to know the maintenance things will require ahead of time so that you’re not surprised later.
Another person told me he wished he had known that blades with a plain edge are easier to sharpen than blades with a serrated edge. Again, this might not have changed any of his purchasing decisions, but he would still have liked knowing the differences between edge types before his first knife purchases.

…not to spend lots of money on my first knife.
One Blade HQ employee told me that he didn’t spend much money on his first few knives. The end result of this was that he was able to have a good learning curve with minimal risk, since he didn’t spend much money right off the bat. If you start collecting slowly, then you can figure out what types of knives you like and then move on to the higher end blades.

…more about steels.
It’s basically impossible to know everything there is to know about every type of steel. However, it’s good to be informed at least somewhat about steels because it will help you to know more about the quality they have and maintenance they will require. For example, a blade that has a high carbon content will likely require more attention than a stainless steel one in terms of preventing corrosion.
While a lot of this knowledge will come with time, it’s good to do a little research on steels before purchasing that first blade. There are a lot of great resources you can use to get some steel info. Blade HQ has a knife glossary that’s great, and ZKnives has a stellar Interactive Knife Steel Chart that pretty much gives you all the info you could ever want about the different steels out there.

…how much variety there is in the knife world.
When you’re just getting interested in knives, I think it takes a while before you really realize just how many different types of knives and manufacturers there are. One Blade HQ customer service representative told me the following:
“I can say that about 60 percent of the customers I meet in the store front say that they never knew there were so many options. —’I wish I knew there was variety so I didn’t just settle on something.’ That is my big rule: don’t settle. You will find a knife you like; there are way, way, way, way, way too many options out there.”
So, don’t limit yourself to one knife because it’s the only one you’ve heard of. Do some looking around before purchasing your first knife because there are probably a lot of different manufacturers you have never heard of before. If you’re a picky shopper, don’t worry and take your time. As stated above, there’s something out there that’s catered to your needs and preferences.

2 thoughts on “Knife Tips: Things I Wish I Had Known…”